The preamble for last week’s seminar ‘Fire Safety in Housing – preparing for a changing landscape’ accepted that “after the tragedy of Grenfell, changes to fire risk management in the housing sector are inevitable.”

However, it was clear from very early in the event, organised by fire risk management company Frankhams RMS, that the scale of the challenge to the sector and the approach was still contestable, even after the publication of the Hackitt Review last year.

Tom Gilbert, director of fire risk management at Frankham RMS, kicked off the seminar, which took place in Westminster, with a post-Grenfell, post-Hackitt rundown. He reinforced the event’s mantra, that it is time to ACT: too look closely at Accountability, Competence and Traceability across all areas that affect fire safety in buildings.

While acknowledging that “a more robust fire safety landscape is happening and will change the way that we work”, Gilbert also posited that there was “a massive difference in opinion on many fire safety activities.” Gilbert, who recently launched a fire safety podcast, felt that Hackitt’s assertion that the industry’s prime motivation was ‘to do things as quickly and cheaply as possible was “a little bit over the top”, adding: “I genuinely don’t believe the indifference is as true as we can see in the report.”

However, he acknowledged a number of Hackitt’s points about a lack of clarity over roles and responsibility, inadequate regulation and enforcement, and her avoidance of an over-prescriptive approach in favour of a systemic change that facilitated intelligent decisions.

Deputy managing director of Local Authority Building Control (LABC) Lorna Stimpson, the next speaker, styled herself as a no-nonsense northerner and did not disappoint, immediately taking issue with some of what Tom Gilbert had said.

“Acknowledging Hackitt’s review as “the biggest challenge to the construction industry in the last three decades,” Stimpson said. “Dame Judith is absolutely bang on: the industry is ignorant and indifferent – maybe people in this room aren’t, so please don’t take offence – but I’m afraid that is a fact.”

“Standards aren’t the outcome of building control; they are the input of all professionals dedicated to protecting the ‘golden thread’, which has to be understood and protected. It can’t be value-engineered away. It can’t be compromised by untrained tradespeople. Site managers can’t substitute products with lower specification ones because of supply delays and budget constraints, but that’s what happens.”

Citing an example of a developer who asked for a limited and set number of inspections for three new tower blocks, Stimpson explained how building companies will shop around for a willing inspector, themselves under pressure. “Compliance must fit the budget’ is what my colleagues are being told.”

LABC’s response to what Stimpson described as “the Wild West” started pre-Grenfell and has since culminated in their UKAS-accredited and independently audited quality management system ‘Build With Us‘. It includes a national building control apprenticeship, accredited level 4 and level 5 qualifications and a specialist building control degree.

Stimpson explained that she did not believe that qualifications meant competency but that “building the quality management system into the management of building control teams” was a part of assuring a level of competency over projects from “a kitchen extension, an HHRB or The Shard.”

In his rundown of the Hackitt Review, Nick Coombe, National Fire Chiefs Council Protection vice chair and the Hackitt & Grenfell lead at the London Fire Brigade, claimed to strike a middle ground between the views expressed. “We have a new regulatory framework whether we like it or not”, he said.

Coombe said that the full review of the ADB was a chance to change the culture. “I was part of the working group that introduced the Fire Safety Order and we always said then that if you want self-regulation then you must have stronger enforcement. People need to know if they don’t get it right, there’s a stick that will make them.”

Coombe went on to raise a number of points about the proposed Joint Competent Authority (JCA), setting out the NFCC’s vision of what a JCA would look like, splitting buildings into commercial, where he said the FSO was already quite well defined, and residential where new fire safety legislation would be required.

He posited that new builds and refurbs would be covered by the JCA, but that its operations would have to be scaled back over existing premises, taking in higher risk premises first. He further suggested that, like the FPA, there could be enabling acts for other building types.

On dutyholders, Coombe wondered how the role would work in the private residential sector where multiple companies are responsible for various aspects of a building (even more so if mixed use), such as lift shafts, corridors, plant runs, etc. He asked: “What happens if no one applies for a licence?” He also wondered about the practicality of Hackitt’s ‘gateways’, where various parts of the building process have to be signed off before the next one can start. 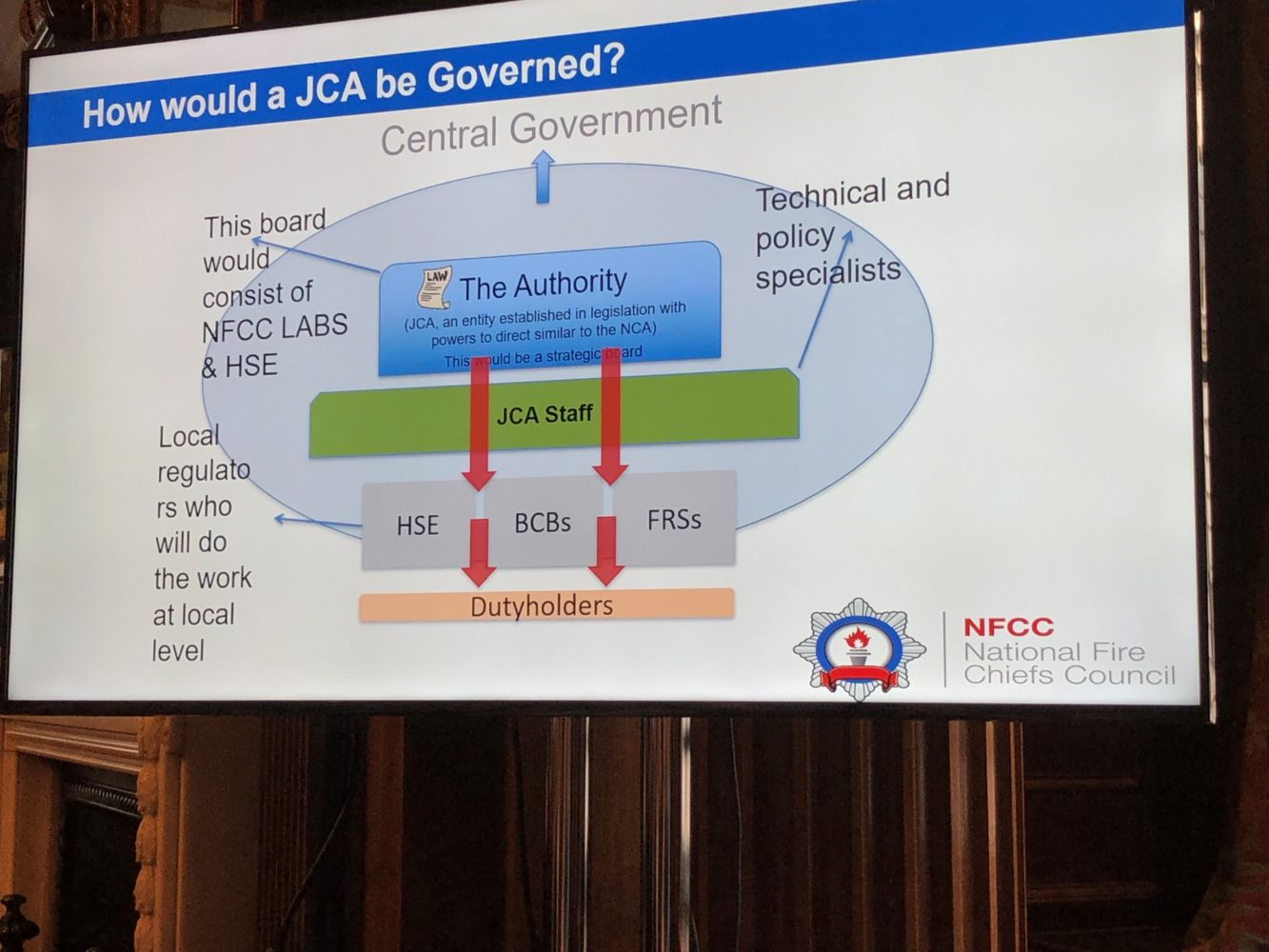 A slide from Nick Coombe’s presentation

Contending that Dame Judith’s solutions were “sometimes good and sometimes not”, Coombe recognised that Hackitt’s review is a unique moment. “We won’t get this opportunity again,” he said.

Tom Gilbert returned to the podium to run through competency issues in the housing sector. He began by observing the “low levels of assurance around this topic post-Grenfell” and a “shift from what I perceive to be unconscious incompetence to conscious incompetence – organisations now understand what they don’t know.”

“Responsible persons now acknowledge that assurance around competence is a critical as traceability of product certification.” Tom Gilbert, director of fire risk management at Frankham RMS

“Responsible persons now acknowledge that assurance around competence is a critical as the traceability of the certification of the products they utilise in their buildings.”

However, the scale of the challenge was underlined when Gilbert reminded the assembled of the Freedom of Information requests made by Inside Housing that found that only 26 out of 128 councils asked had registered FRA assessors – FRA being, he believed, “the most widely acknowledged competency-driven issue”.

It was widely held that use of third-party-certificated products and organisation is a key element in the efforts to reach an acceptable level of assurance. This was a theme that Niall Rowan, CEO at the Association for Specialist Fire Protection (ASFP), returned to, particularly in relation to instances of poor installation of passive fire protection and the fact there is no bar to entry to be a PFP installer.

Third-party certification was integral to the talk from Andrew Thompson of fire-door makers GERDA Security Products Ltd, which co-sponsored the event. Thompson ranged over a number of key things to consider when purchasing fire doors, especially bearing the ‘golden thread’ in mind, for example that ‘doorsets’ are a single-source product as opposed to a ‘door assembly’ that comes from various sources.

The importance of pulling together primary test certification across various areas into a ‘global assessment’ was mentioned along with how varied the tests themselves can be in terms of whether, for example, the letterplate of a door was burned or whether both sides of a glazed door was burned.

The importance of product documentation was part and parcel of Frankham RMS’ David Calvert’s discussion ‘Good documentation for your building’. Calvert started by detailing Building Regulation 38 and then turned to how the ‘golden thread’ could be maintained within existing buildings using: effective digital collation of historical documentation; type 4 intrusive FRA (“we must be going in to the dwellings,” Calvert remarked); and fire strategy, which Calvert described as “a line in the sand”.

On digital collation, Calvert referenced Building Information Management (BIM) models, such as employed on Heathrow Terminal 5, Crossrail and The Leadenhall Building, for better information access. Lorna Stimpson thought a shared digital system between regulators would be less onerous as people thought “there is already a lot of information out there that local authorities and fire authorities share”. She also argued that dutyholders would “ideally be included in this system.”

Elaine Bailey, chief executive of the Hyde Group and on the part of the Hackitt Steering Group, outlined a case study of how a housing association was taking up the baton in the post-Grenfell, post-Hackitt era. Hyde currently operates 50,000 properties and has set up a dedicated, 12-stong taskforce “to get to a place where residents are safe and feel safe.”

The taskforce has identified cladding and ACM and is carrying out a general programme of work, so far comprising two years of FRAs and subsequent remediation work. This has been undertaken as a staggered inspection of tall buildings, first over 10 storeys and then under.

Other activity undertaken by Hyde includes tenancy safety audits, the use of “as many people with accreditations [as possible] to assure ourselves of competency”, and a three-layered approach to protection – ie, measures to prevent fire occurring, stop fires and assist evacuation.

Bailey also pointed out the ‘Landlord Fire Safety Record’ that Hyde have instituted, an “MOT checklist” for relevant information such as what the last FRA said and who is responsible for subsequent actions, going through to certification for lifts, electrics and gas. A version of the LFSR on the Hyde website has even more details, including the evacuation policy and where the nearest fire station is. Resident feedback has been crucial in shaping this approach.

Sharing good practice was something Bailey was particularly keen on and this is the thinking behind The Hyde Fire Safety Framework that provides access to fire safety works, goods and services for public bodies in England and Wales and, in Bailey’s words, “ensures the competencies of the organisations, the products and individual people installing them for us.”

Closing the speeches, Simon Lacey, regional managing director, London & south regeneration at ENGIE UK & Ireland (the event’s principal sponsor), talked about the compliance framework established with Frankham RMS, including training for site teams, middle management and senior management, accredited by the Institute of Fire Safety Managers. He ended his speech emphasising the ACT principles and posited that “assurance is the new insurance.”

Anyone unable to attend this event, or who wants to revisit the presentations, can download the seminar presentations here.

Know your fire safety responsibilities. Download this guide to get:

The post Hackitt and housing: Steps to accountability, competence and traceability appeared first on IFSEC Global | Security and Fire News and Resources.