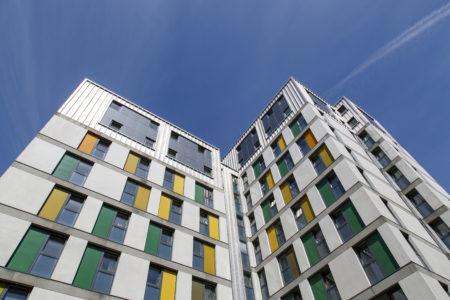 The government has been criticised for focusing too narrowly on Grenfell-style cladding when other types of “untested”, potentially unsafe cladding are widely installed in the built environment.

“Much of the focus on fire safety since the Grenfell Tower fire has been on the ACM,” said Tom Roche, Senior Consultant for International Codes and Standards at commercial property insurer FM Global.

“Only now, almost two years after Grenfell, is the government working on a series of fire safety tests on other types of cladding materials, including high pressure laminate (HPL), which has been popular due to the aesthetics it adds to buildings.

“The fact that this cladding could be sat untested on many buildings is concerning, no more so than for those living and working in the buildings.”

The Ministry of Housing, Communities and Local Government (MHCLG) has admitted it became aware eight months ago that, in 2014, high pressure laminate (HPL) cladding combined with combustible insulation failed a large-scale test.

Inside Housing recently reported that MHCLG subsequently commissioned its own HPL tests but neglected to publicise the results of the failed 2014 test.

It also reissued Advice Note 14, which was first issued in December 2017, advising owners of residential buildings with combustible, non-ACM cladding that “the clearest way to ensure safety is to remove unsafe materials”.

Significant numbers of high-rise residential buildings may have been built with panels containing HPL, compressed paper or wood and synthetic insulation, according to industry data.

With the government response to the cladding crisis patchy, Tom Roche believes that building owners should take the initiative in protecting life and property.

“The checking of cladding and its fire performance shouldn’t need to wait for government testing.” Tom Roche, FM Global

“Although slow to happen, this new set of tests combined with the ban on combustible cladding continue in the right direction towards helping building owners make the right decisions,” he said. “However, they only go so far. They highlight the need for responsible building owners to act.

“The issue of other cladding systems like HPL has been discussed since the Grenfell Tower fire. The implications of the potential for fire spread over the envelope of the building have been clearly demonstrated. The checking of cladding and its fire performance should not need to wait for government testing.”

Roche recommends that building owners reflect on the risk they are willing to bear in terms of property resilience – and not necessarily just do the bare minimum to achieve regulatory compliance.

“Just because the government has only banned combustible cladding on certain types of building, such as high-rise flats, doesn’t mean that these materials are suitable on other types of building without considering their impact in the event of a fire.

“Being compliant with regulatory guidance is a minimum. It doesn’t mean a building is resilient to a fire. The damage can still be quite extensive as long as the people are safe. It’s important that building owners are aware of that and whether that is the only level of performance they want from their building.”

Housing Minister Kit Malthouse recently told parliament that the government was carrying out its own tests on HPL panels and that wall systems using combustible materials would be in breach of building regulations unless they had passed a fire test.

“Large scale testing of material combinations used in cladding systems is the most complete way to understand their performance in fire. When it comes to the safety of our built environment, assumptions are not enough, fact and details are needed otherwise it can be a recipe for disaster.”

The Labour party said the government should have announced a fund to help building owners remove flammable non-ACM cladding. The government has previously pledged £600m towards the cost of removing ACM cladding, which was installed on Grenfell Tower, from residential towers, both privately and council owned.

Labour MP Steve Reed said: “Ministers knew in November 2018 that HPL cladding had failed a fire safety test. They should have taken immediate action to remove it from buildings and keep people safe.

“We already know ministers were warned about flammable cladding before Grenfell went up in flames. There must be no more excuses and no more loss of life. All flammable cladding must immediately be banned and removed, including HPL.”