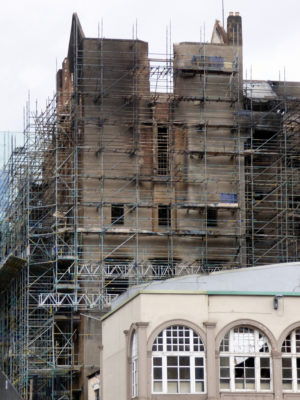 The delayed installation of a water mist suppression system and presence of obsolete ventilation ducts exacerbated two fires at the Glasgow School of Art (GSA), Scottish MSPs have concluded in a new report.

The report into the fires in 2014 and 2018 by the Scottish parliament’s culture committee pulled no punches over what it called the GSA’s attitude in taking precautions against the risk of fire at the Mackintosh building, especially during the restoration of the building after the first fire in 2014.

The committee also called for a public inquiry with judicial powers into the circumstances surrounding the two fires, examining what lessons might be learned from them and ascertaining the wider fire risks to historic buildings.

The MSPs also found that the GSA did not give sufficient priority to safeguarding the Macintosh building, and that its board had insufficient expertise in managing a building of this nature. They also recommend that the Scottish Government review the remit of Historic Environment Scotland to ensure it has sufficient powers to intervene to protect such buildings.

Among its findings, the committee concluded that:

In its response to the committee, the GSA said it had taken additional fire precautions after 2008, including the installation of an automatic fire detection system, CCTV in key areas and call points and sounders throughout the building. It also provided fire extinguishers and 24-hour security staff.

The MSPs also recommended that the Scottish Government, the Scottish Fire and Rescue Service and Historic Environment Scotland carry out a review of category A listed buildings with unique cultural or historic significance, to ascertain whether any additional interventions are needed to mitigate the risk of fire.

The committee also calls for clarification on the degree of compartmentation existing prior to the 2014 fire, and during the subsequent reconstruction phase. It recommends that Historic Environment Scotland updates guidance to reflect the need for improved compartmentation during construction.

MSPs also recommend that the Scottish Government, Historic Environment Scotland and the Scottish Fire and Rescue Service take account of the ongoing debate on the use of PIR insulation, and consider whether such insulation poses an unacceptable fire risk.

A 2006 review of fire protection in the Mackintosh building conducted by Buro Happold said: “Many of the existing features/operational procedures within the building fail to comply with modern fire safety requirements/legislation and could potentially cause, or contribute significantly to, a fire within the building.”

The review also noted that while they represented a relatively new technology with a lack of standards, research and testing, water mist systems had a number of advantages over sprinkler systems, including a reduction in water damage and less space for equipment being needed.

Given that the GSA had decided to install a mist system as far back as 2008, the committee of MSPs questioned why this was not in place at the time of the 2014 fire. In response, the GSA said that the highly complex and bespoke system would cost more than £1m, and that as there were no public funds for that, the money would need to be raised independently.

But the committee heard evidence from a conservation architect who considered the GSA was putting all its eggs in one basket as far as relying solely on the mist system, and that incremental measures such as compartmentation and fire stopping should also have been considered.

“There are always lessons that can be learned, and we are happy to take forward the most appropriate and helpful as we bring this much-loved building back to life,” said the GSA’s Chair, Dr Muriel Gray. “The report, however, includes a worrying number of factual inaccuracies in areas that we have already fully addressed in the parliamentary process.”

“Glasgow School of Art itself must learn lessons from its role in presiding over the building, given that two devastating fires occurred within their estate in such a short space of time,” said Joan McAlpine MSP, the committee’s Convener.

“Throughout the inquiry, further serious issues have been raised which need proper and thorough investigation. Given the complexity of these issues but also their importance, the committee is calling on the Scottish Government to establish a public inquiry with judicial powers. This reflects the seriousness of the loss caused by these two fires.”

In August 2018 Tom Roche of FM Global wrote of the latest Glasgow School of Art fire: “The contributory factors to these fires are all too familiar: combustible materials, combined with a lack of adequate fire protection”.

How comprehensive is your fire strategy? This Director’s Briefing from Barbour covers everything you need to create a “a carefully devised plan of action” around fire safety and prevention.