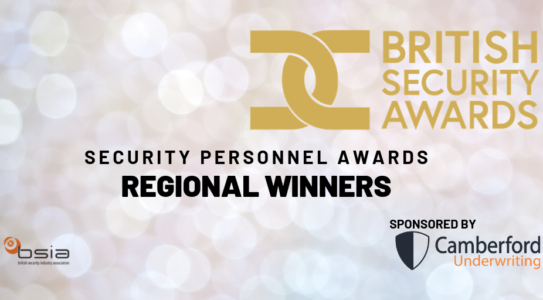 The British Security Industry Association (BSIA) has announced the regional winners – and therefore finalists – of its annual Security Personnel Awards.

Part of the association’s annual British Security Awards, the awards highlight the skills, dedication, and bravery exhibited by security personnel in protecting the public and delivering exceptional service to employers and clients.

Finalists are recognised for achievements such as playing a critical role in helping police investigations and sometimes even saving lives.

Winner of the awards, which are sponsored by Camberford Underwriting, will be revealed on 10 July at the Marriott Hotel, Grosvenor Square, London.

The BSIA British Security Awards have now been running for more than two decades.

“More often than not, these security professionals are first on the scene when incidents occur.” Mike Reddington, chief executive, BSIA

“It is vital as the voice of the professional security industry that we recognise the great lengths security personnel go to in keeping the public and property safe,” said Mike Reddington, chief executive of the BSIA.

“More often than not, these security professionals are first on the scene when incidents and emergencies occur and they demonstrate true quality and professionalism in their actions. This year’s regional winners are no exception and have shown remarkable achievements throughout the past year.

“Judging all the inspirational nominations was a tough task, especially as the process included a substantial number of entries. This year’s winners should be immensely proud of their achievements and we wish them the best of luck as they go forward to the national stage at the British Security Awards in July.”

The 2019 regional winners are:

Protect your lone workers: discover how with ‘Show Me How’ at IFSEC International

How do you discover the best new security products and solutions to protect and safeguard your lone workers? See them in action.

With on-stand demonstrations at IFSEC 2019, you’ll get the chance to speak with designated technicians who will ensure you get a practical explanation of the product, not a sales pitch.

Learn more about ‘Show Me How’